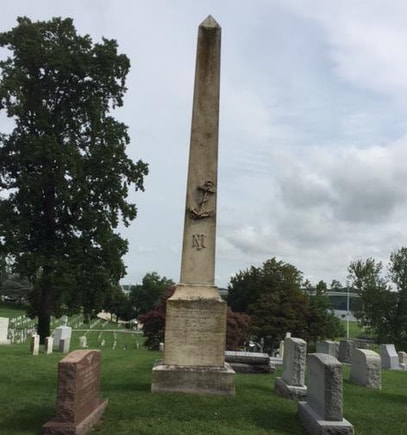 You know, I'm normally not one to just take a leisurely stroll through a cemetery.  But the Cemetery & Columbarium at the Naval Academy is so well kept, it's headstones are so diverse they seem like pieces of art, and you can just FEEL the history here. My fail on this was I didn't do my research before heading over, so I didn't really know what/who I should be looking for.  But then again, because I was ill prepared, I found some interesting things all on my own!

A quick look online shows all of the Superintendents of the Naval Academy are buried there, as well as Admirals, Medal of Honor recipients and Admirals galore.  But once I got home and started looking at the pictures I took, I didn't take any pictures of any of those!
​
Following Flusse, the next memorial that caught my eye was the tombstone of Commander William Cushing.  It seems that while the CSS Albermarle had killed Flusse, it was Cushing who was the brains behind it's demise.  They were trying to figure out a way to take down the iron clad Albermarle.  The Southfield (see above) had already sunk, and the Confederacy had snipers near the remains of the Southfield.  Cushing took 2 picket boats, fixed a 12 pound Dahlgren howitzer to each one, and under stealth of night, sailed the picket boats so it was practically touching the Albermarle and remotely detonated the Howitzer.  The explosion threw everyone overboard and blew a "wagon sized hole" in it's side at the waterline, sinking the mighty Albermarle.  His stone has his uniform, hat and sword atop, and on the other side instead of his name is the word Albermarle.I'm kicking myself for not photographing the other side