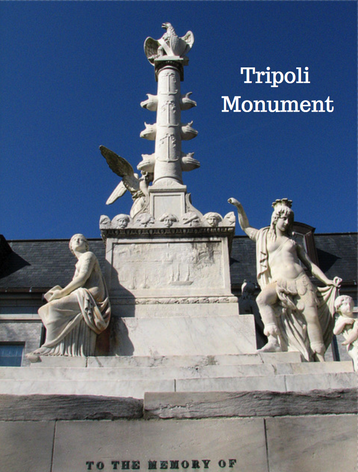 I have to admit, that by the time I reached the Tripoli Monument in my tour, I was tired. I felt like I walked 3000 miles and had taken more pictures than that!  So I took these shots and moved on not even LOOKING at what was in front of me.

This is THE OLDEST MILITARY MONUMENT IN AMERICA!  No joke.  This monument honors the fallen heroes of the Navy from the First Barbary War, which was from 1801-1805.  You know sometimes I have a hard time grasping that, because at that time frame in my mind, my ancestors were using candles and traveling in horse drawn wagons, yet we were fighting in a war off the coast of Africa??

Anyways, I found this great article on the US Naval Institute website with some more interesting information on it. It's dated 2011 and talks about an article written in 1974 about the Monument.

It is carved out of Carrera Marble by Giovanni Carlo Micali in Livorno, Italy and was finished in 1806.  It came to the US on the famous Old Ironsides the US Constitution.  It first went to the Washington Navy Yard, then to the Capitol Building in 1831 where it stayed until 1860 when it came to the Naval Academy.

​I found this that details monument (thanks Wikipedia) : The white marble sculpture consists of a thirty foot high column topped by an eagle and mounted on an elaborate base adorned with allegorical figures representing Glory, Fame, History, and Commerce. History, on the northwest corner, is represented by a seated female figure holding a book in her proper left hand and a pen made of bronze gilt in her proper right hand. She looks up and begins to record the event that she sees. Commerce, on the northeast corner, is represented by a male figure pointing to the column with his proper right hand and holding a caduceus in his proper left hand. Winged Victory stands beside the column, her proper right hand holding a laurel wreath over a sarcophagus and her proper left hand holding a bronze gilt palm branch. The column is adorned with two rows of antique "beaks of galleys" and two rows of antique anchors carved in relief. The sculpture rests on a square base constructed with blocks of stone and adorned with an urn on each corner

On the south side of the monument's base:
Erected in the memory of Captain
Richard Somers, Lieutenant
James Caldwell, James Decatur,
Henry Wadsworth, Joseph Israel,
and John Dorsey who fell in the different
attacks that were made on the city of Tripoli
in the Year of our Lord 1804
and in the 28 year of the independence
of the United States

On each face of the larger bottom base is inscribed:
TO THE MEMORY OF
SOMERS, CALDWELL, DECATUR, WADSWORTH,
DORSEY, ISRAEL

Near the monument is a brass historical plaque placed there after a restoration undertaken in 2000. The first two paragraphs of the plaque are:

THE TRIPOLI MONUMENT
The oldest military monument in the United States honors heroes of the War against
the Barbary Coast Pirates, the new republic's first war. In 1804, President Jefferson ordered
the nation's tiny naval force to the Mediterranean to protect the expanding trade of the new
United States against the pirates, who demanded ransom for safe passage of merchant ships.

"Millions for defense, but not one cent for tribute" became the rallying cry for this war.
Jefferson's action established the doctrine of extension of power overseas and created
a permanent United States Navy.